Rian Johnson‘s next movie is this year’s ensemble mystery Knives Out, but after that, he’ll be returning to a galaxy far, far away for his new Star Wars trilogy. Much of Johnson’s trilogy remains cloaked in secrecy. In fact, the only thing we know about it is that it will be set entirely out of the regular Star Wars mythology. No Skywalkers, no Death Stars, no Sy Snootles. Johnson offered up the tiniest bit of insight into his new Star Wars trilogy, and it sounds as if he’s looking to the original trilogy for inspiration.

END_OF_DOCUMENT_TOKEN_TO_BE_REPLACED

In February of 2018, Game of Thrones creators David Benioff and D.B. Weiss were officially announced as the writers and producers of a new series of Star Wars movies. Technically, that’s still the only piece of official information from Disney and Lucasfilm about the duo’s involvement in a galaxy far, far away, but now a new report suggests that they may not be writing each entry in that upcoming film series after all. END_OF_DOCUMENT_TOKEN_TO_BE_REPLACED

‘Death on the Nile’: Russell Brand May Board Kenneth Branagh’s Murder Mystery

Kenneth Branagh‘s Death on the Nile has found its latest suspect.

Russell Brand is in talks to join the Death on the Nile cast in the 20th Century Fox adaptation of Agatha Christie’s 1937 novel that is being shaped as a sequel to Branagh’s 2017 adaptation of Christie’s Murder on the Orient Express.

END_OF_DOCUMENT_TOKEN_TO_BE_REPLACED

Most interviews are a little nerve-racking. If you do enough of them, the butterflies in the tummy tend to only pop up on special occasions, but you’re always just a tad on edge because there’s a lot of uncertainty. What if the interview subjects are tired? What if the questions you’ve thought up and think are pretty good turn out to be the same crap they’ve heard a hundred times that day?

That uncertainty doubles when you’re talking to kids. Anything can happen! They could give you one sentence answers or they can go the opposite way and go crazy but not really answer anything. I’ve experienced both over my time doing this and I’m pleased to say the cast of Good Boys struck a nice balance between being little professionals and also still kids that are excited to talk about the fun time they had.

It was an odd experience, though, because in front of me there were the three stars of the movie, Jacob Tremblay, Brady Noon and Keith L. Williams as well as writer Lee Eisenberg and writer/director Gene Stupnitsky and behind me there were easily a dozen moms, dads and extended families of the kids I was talking to. So, I had an audience.

END_OF_DOCUMENT_TOKEN_TO_BE_REPLACED

Dave Chappelle is releasing a new Netflix standup special, and it arrives on the streaming service later this month.

After spending several years off the grid and out of the public eye, the comedian is in the midst of a full-fledged comeback. He won an Emmy for Equanimity, his Netflix standup special released in late 2017, and that performance combined with his work on another Netflix special he released simultaneously called The Bird Revelation also won him a Grammy for Best Comedy Album.

Now Chappelle is back with a new special called Sticks and Stones, and the teaser trailer is narrated by a very familiar voice. Check it out below.
END_OF_DOCUMENT_TOKEN_TO_BE_REPLACED 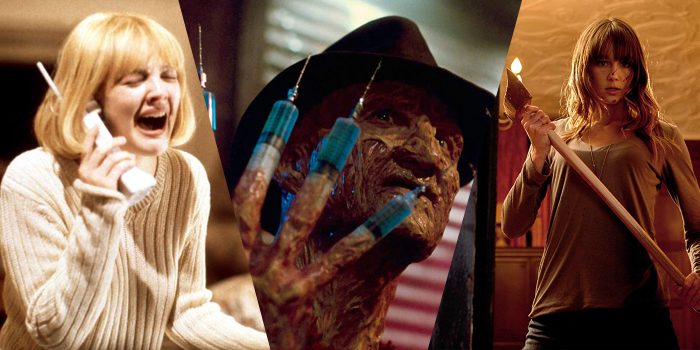 (Welcome to Now Scream This, a column where horror experts Chris Evangelista and Matt Donato tell you what scary, spooky, and spine-tingling movies are streaming and where you can watch them.)

Matt: My life still isn’t cobbled back together after moving cross-country, so Chris is letting me slide with one more “random selection” week because he’s a top-notch guy. You try scheduling movers, remembering to turn your electricity on, AND taking time to curate a selection of themed streaming horror flicks. Alright it’s not that hard, but hey, take a pass when you can. In any case, thanks for reading and I hope these columns have brought new discoveries into your horror-lovin’ lives!

Chris: Matt and I racked our brains for a theme this week, but I just got back from vacation and I’ll be honest: my mind is mush. So instead, we decided to go theme-less, like the naughty boys that we are.

END_OF_DOCUMENT_TOKEN_TO_BE_REPLACED

Since Dwayne Johnson won’t be returning for Fast and Furious 9, the sequel needs to find some muscle elsewhere. They’ve already brought in John Cena for a role in the franchise, but instead of reaching back into the world of wrestling for another cast member, they’ve snagged a UFC fighter to get in on the action. Francis Ngannou, the #2 fighter in the heavyweight division of UFC, is joining the Fast and Furious 9 cast. END_OF_DOCUMENT_TOKEN_TO_BE_REPLACED

Sacha Baron Cohen is nigh unrecognizable in The Spy, and that’s not just because he’s gone undercover. The actor and comedian is giving a rare serious turn in the upcoming Netflix limited series, which tells the story of Israeli spy Eli Cohen, a distant relative of Baron Cohen. While the resemblance is uncanny, The Spy first look photos released by Netflix show a Baron Cohen who is far removed from the outrageous comedy he is known for.

END_OF_DOCUMENT_TOKEN_TO_BE_REPLACED

It would be easy to categorize Carnival Row—the eight-episode Amazon Original series set to premiere on August 30th—as Amazon’s attempt to create a Game of Thrones-esque hit for their streaming platform. This categorization isn’t wrong, exactly—Amazon has clearly invested a large amount of money to make this a flagship show for them—but placing Carnival Row into only this bucket does the series a disservice.

Yes, the new series is like Game of Thrones in that it takes place in a darkly fantastical world full of geopolitical strife and unnatural evils; and yes, like a certain HBO show, Carnival Row, with its graphic deaths (and innumerable close-up shots of entrails), nudity and foul language, is definitely not suitable for children. These similarities, however, are superficial at best. Viewers will get a different experience here—a more intimate one that reveals Carnival Row’s magically effed-up world through a cadre of unique individuals with varying levels of social status.

END_OF_DOCUMENT_TOKEN_TO_BE_REPLACED

The Best Streaming Horror Movies You Should Watch Right Now

Who is the Main ‘She-Hulk’ Villain? Titania Explained

‘Star Wars: The Bad Batch’ Tackles One of the Greatest ‘Clone Wars’ Threats With “Battle Scars”

‘OddTaxi’ Feels Like the Coen Brothers Made an Anime Starring Animal People, and It’s Great

The War of the Rohirrim: The New ‘Lord of the Rings’ Movie Explained