This weekend, actress Eliza Dushku took to Facebook with a story alleging that True Lies stunt coordinator Joel Kramer molested her during production when she was just 12 years old. Kramer has denied these allegations, but no one is taking this situation lightly at all.

True Lies director James Cameron appeared on a Television Critics Association panel, the day after Dushku revealed this story, for his AMC docuseries James Cameron’s Story of Science Fiction. When asked about Dushku’s post, Cameron said he had only just heard about it, and he did not know that this happened behind the scenes. END_OF_DOCUMENT_TOKEN_TO_BE_REPLACED

Where The ‘Bring It On’ Characters Would Be 15 Years Later

On August 25th 2000, Bring It On hit theaters nationwide. Thats right, want to feel old? Its been 15 years since the release of that movie. I’ve always loved that movie for whatever reason, call it a guilty pleasure. I feel like it were released today it would have a bunch of theatrical sequels and the same success that we’re seeing from the like-minded Pitch Perfect franchise.

But what would a real Bring it on Sequel look like? I’m betting that a few years down the line we could see a theatrical Bring It On sequel/reboot with the stars playing mothers, coaches, or teachers. But where might the characters of Bring It On be 15 years later? The cast of the 2000 film give us their answers.

END_OF_DOCUMENT_TOKEN_TO_BE_REPLACED

Want to see the first posters in Mondo’s Avengers series featuring Black Widow and Hawkeye? Could we see a new Dark Knight Rises trailer soon? How did a small town make a young boy’s dream of being Batman a reality? Which crazy Avengers rumors did the cast enjoy the most? Has David Slade offered an update on Daredevil? What was an earlier movie version of Daredevil going to be about? How many directors does Forbes think could take over Batman after Christopher Nolan leaves? Read about all this and more in today’s Superhero Bits. END_OF_DOCUMENT_TOKEN_TO_BE_REPLACED

After Frank Miller wrote the end of Batman’s story in The Dark Knight Returns, he and the brilliant comic artist David Mazzucchelli took to the pages of Batman’s regular comic series to remap the character’s origin in Year One. Those issues (Batman #404-407 in 1987) became one of the landmark Batman stories. For almost twenty-five years Year One has had a lasting effect on major Batman storylines, even instigating  the scuttled Darren Aronofsky Batman film a decade ago, and eventually providing a good deal of inspiration to Christopher Nolan’s subsequent film Batman Begins.

Warner Premiere is continuing its series of animated DC Comics films with a direct to DVD animated take on Batman: Year One, starring Ben McKenzie as Batman, Bryan Cranston as Lt. James Gordon, Eliza Dushku as Selina Kyle/Catwoman, and Katee Sackhoff as Detective Sarah Essen. We’ve already seen some art, and for a moment there was a ten-minute making of featurette that has since been taken offline. Now there is a trailer, which you can see after the break. END_OF_DOCUMENT_TOKEN_TO_BE_REPLACED

Christopher Nolan‘s The Dark Knight Rises isn’t the only new Batman film in the works. Warner Premiere, DC Entertainment and Warner Bros. Animation are continuing their string of animated DC films with a long-awaited animated version of Batman: Year One, the seminal Batman origin story written by Frank Miller and drawn by the incomprable David Mazzucchelli in 1987.

Now the core voice cast has been announced, which includes Bryan Cranston, Ben McKenzie, Eliza Dushku and Katee Sackhoff. And there are two images available, too. One is above, and the other follows after the break. END_OF_DOCUMENT_TOKEN_TO_BE_REPLACED

“I ain’t ‘fraid of no ghost,” but I am afraid when more Ghostbusters 3 information comes out. Much like a fourth Indiana Jones film, Ghostbusters 3 is one of those projects I dreamed about as a kid but never thought I’d see happen. Yet with every rumor about a script, Bill Murray appearance and production start date, the 10-year-old in me begins to smile…and then worry that it’s going to be screwed up.

Well, add another bit of info to the ever-growing pile as co-writer, producer and star of the franchise, Dan Aykroyd was recently on a Chicago radio station and confirmed that not only is Ghostbusters 3 currently casting, but that several names are already “strong possibilities.” Find out exactly who after the jump. END_OF_DOCUMENT_TOKEN_TO_BE_REPLACED

A sequel to Free Enterprise is finally happening, and over the past couple week’s we’ve been hearing rumblings on the casting front. If you haven’t yet watched Robert Meyer Burnett‘s 1998 indie film, it can be easily described as Swingers for sci-fi geeks. It was about two aspiring LA filmmakers/Trek geeks who meet their screen idol, William Shatner (played by himself), who turns out to be nothing like the person they had imagined. The film has gone on to become something of a cult classic among geeks, and I highly recommend you check it out.

Last week we reported that William Shatner has confirmed that he would be returning for the sequel, with plans to begin shooting later in July. Isaiah Mustafa, the guy who appears in the Old Spice commercials, revealed that he also has a role in the upcoming project while appearing on G4. And last week we noticed some tweets from actresses Eliza Dushku and Alicia Witt talking about a twelve year old movie only a few people have seen. Could they also be involved in the upcoming sequel?

END_OF_DOCUMENT_TOKEN_TO_BE_REPLACED

Though their recently deceased TV series Dollhouse was not the ratings hit it perhaps should have been, definitely when you consider the heights it ultimately reached in creative terms, the signs are good for an imminent upcoming collaboration between geek god Joss Whedon and his buttock-whupper muse Eliza Dushku.

END_OF_DOCUMENT_TOKEN_TO_BE_REPLACED

Just because Peter is back on the scene with Page 2 doesn’t mean I have to skip the occasional casting roundup. First up, Kristen Bell will appear opposite Christina Aguilera in the musical drama Burlesque, not to be confused with that Showgirls sequel we talked about the other day. The film takes place in “a Los Angeles neo-burlesque club, reminiscent of the nightclub in Bob Fosse’s Cabaret.” Bell will be Nikki, “the loose-cannon lead dancer and main attraction at the club who spirals out of control when Aguilera’s character suddenly gets the spotlight.” A few tickets were probably sold based on that paragraph alone. [THR]

After the break, news on projects for Parker Posey, Mia Wasikowska and Eliza Dushku. END_OF_DOCUMENT_TOKEN_TO_BE_REPLACED 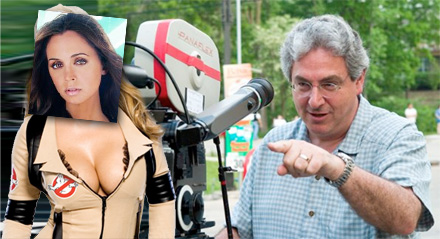 END_OF_DOCUMENT_TOKEN_TO_BE_REPLACED

‘Cells at Work: CODE BLACK’ is an Anime That Will Scare You Into Taking Better Care of Yourself

The Quarantine Stream: No Thoughts, Head Empty, Just Watching Clips of ‘Ghost Stories,’ The Most Outrageous Anime Dub Ever

Spoiler Discussion: The Falcon and the Winter Soldier Episode 4 “The Whole World Is Watching”