When we visited the London set of Mary Poppins Returns last year, one thing was said time and time again: this is a sequel, not a remake. This meant that director Rob Marshall and his team had to capture everything that made the 1964 original so charming while also aging it to reflect the passage of time (and more refined audience tastes). Naturally, this meant costumes and sets that captured that familiar magic while also reinventing that magic for a new generation. Here’s how they made it happen.

END_OF_DOCUMENT_TOKEN_TO_BE_REPLACED

With the final season of Game of Thrones nearly upon us, HBO is hard at work to keep the fantasy world alive in at least one prequel show. George R.R. Martin, the author who first crafted the elaborate fantasy worlds of Westeros and Essos on the page, is involved as a co-creator and executive producer of the upcoming series, and in a new interview, he shared some more details about the show – including a better idea of where it falls on the timeline compared to the original series.  END_OF_DOCUMENT_TOKEN_TO_BE_REPLACED

A few weeks ago, I sat down with directors Phil Johnston and Rich Moore, alongside producer Clark Spencer, to discuss their latest film Ralph Breaks the Internet. We talked about what made this worthy of being a rare Disney animated sequel and the evolution of the story through development; Johnston told us what’s going on with Reply All and Phantom Tollbooth; we discussed how Moore helped create Ned Flanders on The Simpsons; and the inspiration of Slaughter Race, the unlikely possibility of a theme park land based on this new creation, and much more.

END_OF_DOCUMENT_TOKEN_TO_BE_REPLACED

Studio-appointed release dates are lame! What’s really cool is seeing a movie early. And if Bumblebee is one of those movies you just can’t wait to clap eyes on, you’re in luck – Paramount is giving you a chance to catch some Bumblebee early screenings. You need to plan accordingly, though – the early screening is one day only!

END_OF_DOCUMENT_TOKEN_TO_BE_REPLACED

The Unpopular Opinion: ‘Book of Shadows: Blair Witch 2’ is an Unsung Masterpiece of Horror Metafiction

Welcome to The Unpopular Opinion, a series where a writer goes to the defense of a much-maligned film or sets their sights on a movie seemingly beloved by all. In this edition: the much-derided sequel to The Blair Witch Project actually rules, thank you very much.)

A little over a year after The Blair Witch Project hit theaters and subsequently became a box office phenomenon, Artisan Entertainment released a sequel that did…the opposite.

Book of Shadows: Blair Witch 2 was meant to capitalize on the success of the first film, expanding the mythology for Blair-obsessed audiences eager for another trip to the Burkittsville woods. But Joe Berlinger’s self-aware sequel failed to bewitch fans the same way its predecessor had. And that’s a shame because Book of Shadows is one of the most delightful and rewarding sequels in horror history.

END_OF_DOCUMENT_TOKEN_TO_BE_REPLACED

‘Monster Hunter’ First Look: Tony Jaa and Milla Jovovich Are on the Hunt

If you were worried that we haven’t had a video game movie from director Paul W.S. Anderson for a couple of years, Screen Gems has you covered. And this one is another adaptation of one of Capcom’s best-selling video game franchises.

Monster Hunter is an action role-playing game following the Hunter, who slays or traps large monsters across a vast world as quests are handed to him by the locals. Players gather loot and resources in order to build up their weapons, armor and more in order to take down more powerful monsters.

Now the game is coming to the big screen with Tony Jaa as the Hunter and Milla Jovovich as an original character named Natalie Artemis, and the first photo from the film’s set down in South Africa has been revealed. Check out the first Monster Hunter movie photo below. END_OF_DOCUMENT_TOKEN_TO_BE_REPLACED 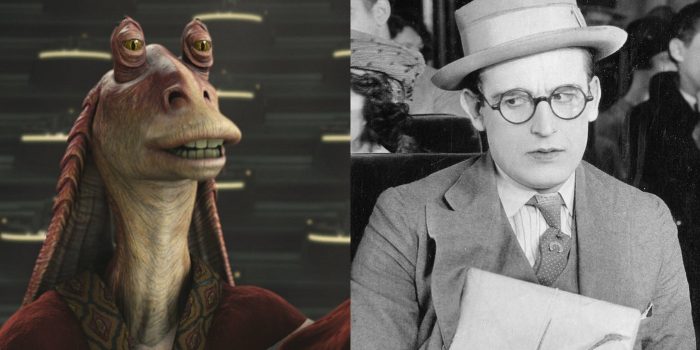 (Welcome to The Movies That Made Star Wars, a series where we explore the films and television properties that inspired or help us better understand George Lucas’ iconic universe. In this edition: Girl Shy.)

Among film nerds, Harold Lloyd is a household name. Saying his name instantly evokes images of the bespectacled actor dangling from a clock or in other improbable and impossibly dangerous situations. Made in 1924, Girl Shy was Harold Lloyd’s first production independent of Hal Roach and he wanted it to focus less on the stunts he’d been known for and more for his character work. That doesn’t mean Girl Shy doesn’t have its own thrilling stunts, as the climax of the film might have been the most exciting sequence Lloyd ever accomplished in his career, but the character work leading up to that sequence was the most well-developed Lloyd had pulled off. He plays a young tailor’s apprentice who wants to be an author. He’s also impossibly shy around girls and has a terrible stutter when he’s nervous. Think about that: Harold Lloyd is able to portray a verbal stutter in a silent film from 1924. He’s clumsy and shy, but that doesn’t stop him from falling in love and the climax plays out like an early version of The Graduate, with Lloyd’s character breaking up a wedding in order to reunite with the love of his life.

Though during his time making films through the ‘20s and ‘30s, Lloyd was spoken of in the same breath as Buster Keaton and Charlie Chaplin, it was Lloyd himself that prevented his legacy from flowering as much as it should have. He controlled the rights to all of his films and very rarely allowed them to be played for a variety of reasons. Now, almost a hundred years after the peak of his popularity, Lloyd is taking his more rightful place in the history of cinema.

But how does that connect to Star Wars?

END_OF_DOCUMENT_TOKEN_TO_BE_REPLACED

That Big ‘Fantastic Beasts: The Crimes of Grindelwald’ Twist is True, According to Ezra Miller

Fantastic Beasts: The Crimes of Grindelwald ends with a whopper of a twist – a twist that many fans aren’t so sure about. For one thing, it ignores well-established Harry Potter history. Could it be a fake-out? A trick that the movie is playing on audiences? According to Ezra Miller, who plays a big part in the twist, it’s the real deal.

Read Miller’s thoughts on the Crimes of Grindelwald twist below – and of course, beware of spoilers.

END_OF_DOCUMENT_TOKEN_TO_BE_REPLACED

Now Scream This: The Best Horror Movies About Family to Stream This Thanksgiving 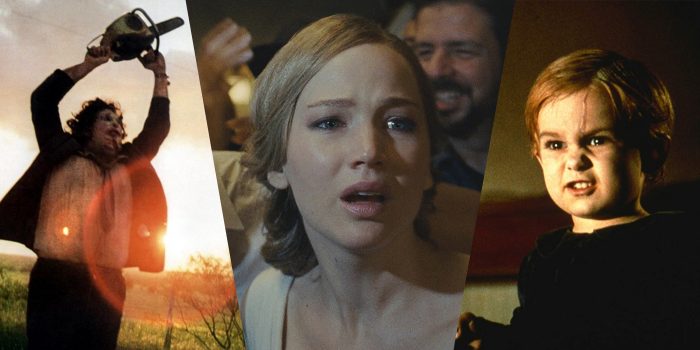 (Welcome to Now Scream This, a column where horror experts Chris Evangelista and Matt Donato tell you what scary, spooky, and spine-tingling movies are streaming and where you can watch them.)

Matt: Thanksgiving – the nightmare that is cyclical forced family engagements. Another night spent dodging questions about how you’re almost thirty and still not “settling down,” forced to seek comfort inside a whiskey bottle while averting Aunt Sally’s searing judgemental snark (“hypothetically”). This year, why not just skip all the in-person terrorization and stream an at-home “Horrors Of Family” marathon? There’s no other choice regarding “Now Scream This” theme with Thanksgiving on the horizon, so Chris and I thought it fair to recommend some of our favorite horror flicks involving family units (you can watch right now). Child snatching demons, chainsaw massacres, and hairy Celtic rogues. Still somehow more normal than Thanksgiving dinner conversations.

Chris: It’s Thanksgiving week (unless you’re Canadian – then you celebrate Thanksgiving in April or some such nonsense). The holiday rolls around every November to give us an excuse to act like gluttons while also forcing us to spend time with our families. What could be more horrifying than that? In honor of Thanksgiving, Matt and I have gathered together films that reflect the horrors of family – be it in the form of a family get-together, or otherwise. So this Thanksgiving week, after you’ve eaten too many carbs, why not kick-back and watch some of these horror movies? Or you could watch football like a weirdo, I guess.

END_OF_DOCUMENT_TOKEN_TO_BE_REPLACED

It’s unclear how Star Wars: Episode 9 will handle Carrie Fisher’s tragic passing, but we do know that  through the use of unused Star Wars: The Last Jedi footage, General Leia Organa will appear onscreen one last time. And star Oscar Isaac assures us that in the film, Leia’s arc and Fisher’s passing will be handled in “a really beautiful way.”

END_OF_DOCUMENT_TOKEN_TO_BE_REPLACED

The Quarantine Stream: ‘Raising Arizona’ is a Delightfully Weird Metaphor for Parenting

‘Howard’ Review: A Soulful Tribute to the Man Behind Disney’s Most Beloved Animated Classics

‘An American Pickle’ Review: A Clumsy But Sweet Story About Family, Friendship, and Pickles

Revisiting ‘Mars and Beyond’, Disney’s Influential Animated Documentary Short About Space Travel and Life on Mars

How to Build the Ultimate Home Theater During the Pandemic

The Quarantine Stream: ‘Impetigore’ and ‘Satan’s Slaves’ Prove That the Next Great Horror Movies Are Coming From Indonesia

‘Japan Sinks 2020’ is a Bleak, Violent Disaster Anime That Hits Harder During Lockdown