This year is the 80th anniversary of the introduction of the DC Comics superhero known as Batman. It was Detective Comics #29 in 1939 where The Dark Knight started fighting crime, and now he’s one of the most beloved comic book characters of all-time. There have been and will continue to be all sorts of celebrations for the Caped Crusader, and LEGO has added some more to the pile with a new batch of LEGO Batman 80th anniversary sets coming to shelves in August. Check the out below. END_OF_DOCUMENT_TOKEN_TO_BE_REPLACED

The Morning Watch is a recurring feature that highlights a handful of noteworthy videos from around the web. They could be video essays, fanmade productions, featurettes, short films, hilarious sketches, or just anything that has to do with our favorite movies and TV shows.

In this edition, watch the third and final video essay in a series about the limitations of the Marvel Cinematic Universe. Plus, watch as Dumbo director Tim Burton and his costume designer Colleen Atwood break down an exquisite scene from the Disney remake, and listen as the Fab Five from Netflix’s Queer Eye answer the web’s most searched questions about them. END_OF_DOCUMENT_TOKEN_TO_BE_REPLACED

While IMAX is still king of the premium large format brands because of the sheer size of its screens, it has to face a barrage of new contenders for the crown. The latest is THX Cinema Ultimate, a new premium large format (PLF) brand debuting later this year intended to “help elevate the industry standard and bring premium experiences around the world to a whole new level.”
END_OF_DOCUMENT_TOKEN_TO_BE_REPLACED

Marvel’s Agents of SHIELD,some say is very underappreciated which , had a panel at WonderCon to tease the show’s upcoming sixth season. /Film had a chance to speak with creators Jed Whedon and Maurisa Tancharoen, producer Jeff Bell and cast members Clark Gregg and Henry Simmons about the new season. It will be a full year by the time season six premieres on May 10, but here’s a few tidbits to get you through the coming weeks. END_OF_DOCUMENT_TOKEN_TO_BE_REPLACED 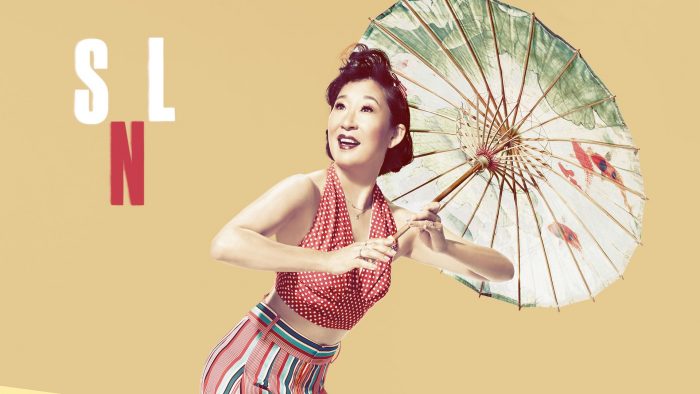 After Saturday Night Live had two back-to-back killer episodes with John Mulaney and Idris Elba, there was a lot of hope that the cast and crew could keep that momentum going into spring with the next batch of new episodes. Unfortunately, despite the strength of first-time host Sandra Oh (Grey’s Anatomy, Killing Eve), the sketches didn’t make nearly as big of a splash as the previous two episodes. That’s not to say there aren’t some great sketches, but most of them were only mildly amusing, weird without any real payoff, or just plain disappointing.

Tom Holkenborg, aka Junkie XL, is preparing to teach a whole new generation of film composers. The composer behind the scores of films like Batman v Superman: Dawn of Justice, Mad Max: Fury Road, and Deadpool, is launching the SCORE Academy, an annual year-long program that offers emerging composing talents the chance at hands-on instruction with him.

END_OF_DOCUMENT_TOKEN_TO_BE_REPLACED

Jordan Peele‘s latest film Us has been talked about endlessly since hitting theaters over a week ago. The film is a layered, terrifying allegory for, well, a lot of different issues facing our society today. And what’s great is that there are so many interpretations of the movie out there which make perfect sense. It’s the kind of movie we’ll be dissecting for years.

Meanwhile, Saturday Night Live did what they do best by taking the popular movie and putting a comedic spin on it. In what is probably the best sketch we could have gotten based on Us, the movie is turned into one of those Discover credit card commercials where a customer talks to themselves as a customer service representative. There’s even an explanation for one of the most incessantly asked mysteries in the movie. Watch the Saturday Night Live Us sketch below. END_OF_DOCUMENT_TOKEN_TO_BE_REPLACED

Cobra Kai put YouTube Premium on the map with originals. The sequel to the Karate Kid films became a phenomenon when it premiered last year, and YouTube ordered a second season in the first week. Since then, YouTube decided to stop investing in original series. Now the second season of Cobra Kai is about to premiere and fans definitely want to know there will be more

Cobra Kai creators Jon Hurwitz, Hayden Schlossberg and Josh Heald were at WonderCon for Cobra Kai. The creators seemed to have it on good authority that YouTube is still behind Cobra Kai, and had some more teases for the upcoming season. END_OF_DOCUMENT_TOKEN_TO_BE_REPLACED

With the new Child’s Play this summer (watch the teaser trailer), we get an all new Chucky. This time the doll is said to turn towards the sinister side thanks to advanced artificial intelligence inside a new doll for a contemporary audience. Since we’re getting a whole new Chucky, it only makes sense that the doll who turns into a murderous force of nature gets a new voice. Today Orion Pictures and MGM announced Star Wars saga legend and beloved voice actor Mark Hamill will bring the evil doll to life. END_OF_DOCUMENT_TOKEN_TO_BE_REPLACED

‘Annabelle Comes Home’ Trailer: The Haunted Doll Becomes a Beacon for Other Spirits

Annabelle Comes Home is the third installment of the horror franchise spin-off of The Conjuring, and the haunted doll looks to be more terrifying than ever. This time it’s not just the possessed doll who is bringing scares, because it turns out she’s some kind of beacon that calls other spirits to wherever she is. Unfortunately, she just so happens to be locked up in the home of Ed and Lorraine Warren (Patrick Wilson and Vera Farmiga), that is until a curious teen unleashes her evil again and the doll begins to target the Warrens’ daughter (Mckenna Grace). END_OF_DOCUMENT_TOKEN_TO_BE_REPLACED

21st Century Spielberg Podcast: Steven Spielberg Returned to the Great Adventure with ‘Indiana Jones and the Kingdom of the Crystal Skull’ and ‘The Adventures of Tintin’